Each year Lander Brewfest awards 1st, 2nd, and 3rd place CHAMPIONS AWARD for a pre-selected style of beer.  This year’s competition entries will be Strong Beers. Entries may be any style, as long as the style is above 8% abv. Entries MUST declare a category from the Brewer’s Association Style guidelines.  Entries will be judged by how closely they meet their declared style.

Lander Brewfest brews are judged by a committee of professional and non-professional judges. Judging takes place on Friday and awards are announced and handed out on Saturday.

In addition to the Champion’s Awards, a PEOPLE CHOICE BEST BREWERY award is distributed to the brewery that collects the most votes via token over the course of the two day event. 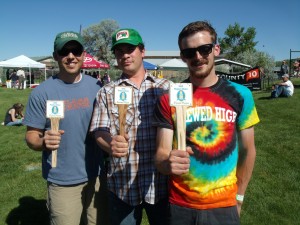 2017 Submissions were by the Following Breweries (in alphabetical order):